This was our 10th time of hosting such a conference and it was nice to see so many students in action after two years of pandemics. The delegates worked hard on establishing many important resolutions that went along the main theme of the conference: “The future of our multicultural world”.  The conference includes nine committees, ranging from the Security Council and Human Rights Council, to more nuanced ones, such as the Crisis Committee and the Historical Security Council.  Through intensive debates, delegates have reached a consensus on varying issues, which are deeply rooted in our modern society. The driving force behind the conference was a group of Year 12 students and one Y11 student with Maxim taking on the role of the President of the general Assembly as well as our Y13 Sandra who acted as Secretary General of the conference. The highlight of the conference was an opening speech by TBSMUN2022’’s guest of honour, his Excellency Lloyd Brodrick, Ambassador of Australia to Poland Czech Republic and Lithuania. His opening speech provided words of wisdom, advice and guidance to the delegates throughout the conference.

We also had a chance see and hear an amazing Summer Performing Arts Concert on Monday evening. There was drama, ballet, tap dancing, choir, orchestra  and  lots of great music performances, including folk and classical music, classic rock and obviously the Beatles.  Many hours of preparation, a multiple of performers and passion for musics, dance and drama that culminated in a fantastic evening that only reflected TBS’s on-going commitment to the Arts programme. On Monday many of our Y11 students were introduced to the IB programme, educational journey that they will begin in September.  IB Diploma Programme is without a doubt that best secondary school preparatory programme for university, life and workforce.  It “aims to develop inquiring, knowledgeable and caring young people who help to create a better and more peaceful world through intercultural understanding and respect”. We finally have Green Camps, Primary school already attended by the students and secondary school camps coming next week.   In addition, we are celebrating outdoor education by having sport’s days for secondary school this week. The idea of a green camp and sports days is closely related to the early years of IB programme and the idea of outdoor learning and adventure education that was promoted by Kurt Hahn. The Duke of Edinburgh Award (14 students from Y12 and Year 10 on the way to wilderness this weekend) was just a natural follow up to Hahn’s philosophy of education.  The principles of the outdoor learning, outlined by Hahn in 1930 document, emphasized providing children with an opportunity for self-discovery, making children meet with triumph and defeat and allowing children to train their imagination.  I strongly believe that our outdoor programme at TBS Warsaw, so well reflected in sport’s days and green camps, clearly demonstrates that these three principles above are a part of our learning philosophy and educational vision for now and for the future. Message from our Head of Early Years

What a year this has been,
read more
News image 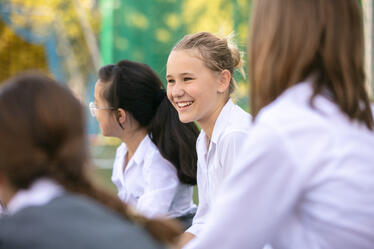