Journalism Club gives Secondary students the opportunity to explore and write about a variety of issues. Following is an editorial piece written by Simon in Year 13.

High School Students on the 2016 Election Journalism Club gives Secondary students the opportunity to explore and write about a variety of issues. Following is an editorial piece written by Simon in Year 13.

Journalism Club gives Secondary students the opportunity to explore and write about a variety of issues. Following is an editorial piece written by Simon in Year 13.

Election Day 2016 marks what will be the first presidential election many students vividly remember. Only a small portion of the student body (seniors who have turned 18 before Nov. 8) will actually be able to vote in the election, but many students have been engaged in discussion about the event that will come to define the next four years of American politics and beyond. What has influenced their perception of the candidates? Which policy matters do they consider most important and why? What do they perceive about the dynamic of this election? 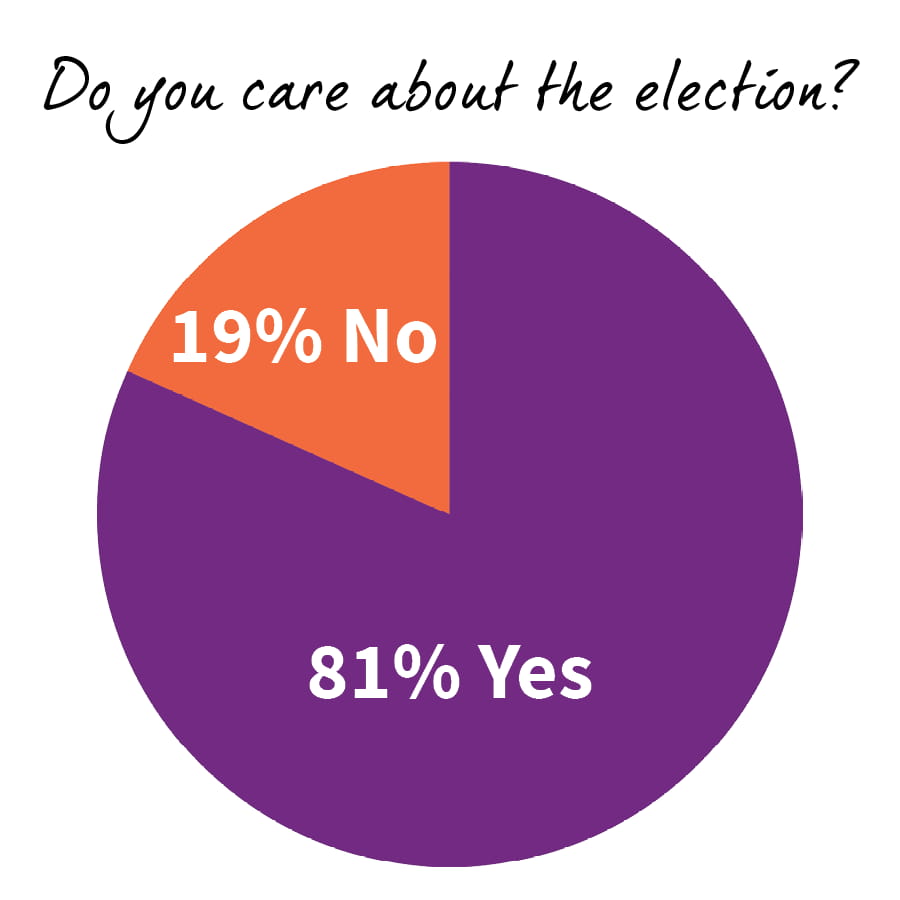 Journalism Club conducted a survey of high school students to get a sense of the general attitude towards the election. The results were dramatic, but perhaps not surprising. Most students expressed interest in the election: 82 percent said they care about it. Eighty percent said they would vote if they were 18. This number is actually quite high, considering voter turnout of approximately 58 percent in the 2012 presidential election, according to the Bipartisan Policy Center. Most students have a negative attitude towards the election. When asked to write one word to describe the dynamic of the election, the most common response was “corruption.” It is telling that our students perceive corruption. According to the Center for Information & Research on Civic Learning and Engagement, Democratic presidential candidate Bernie Sanders received more than double the youth votes in the primary than Hillary Clinton and Donald Trump. The campaign focused in part on eliminating money from politics and addressing income inequality. With alleged ties to corporations and banks, Democratic nominee Hillary Clinton has also faced accusations of corruption. WikiLeaks heightened the issue by releasing internal emails from the Clinton campaign.

Trump has not escaped accusations of corruption either. In September, Trump faced scrutiny over an alleged contribution to the campaign of Florida Attorney General Pam Bondi, who after receiving the contribution shut down inquiry into the questionable practices of Trump University. There have also been allegations of Trump not paying dishwashers, painters, and waiters he employed, and revelations of tax evasions.

When asked to indicate the issue they considered the most important in the election, “terrorism/foreign policy” and “immigration” were the two most popular concerns. This comes at a time when ISIS is causing untold destruction and expanding its influence, a civil war rages in Syria, and America contemplates how many refugees to allow into the country in light of recent events in Europe. We have witnessed many European countries absorb a great number of refugees and economic migrants from the Middle East and North Africa. Germany, with one of the most liberal policies, accepted nearly a million refugees last year (1 percent of the population), and is now experiencing unrest as far-right parties protest the intake. The United States has taken in comparatively few refugees so far, and the candidates differ greatly on their approaches. Clinton has promised to increase the number of refugees allowed in the country from 10,000 to 65,000 per year, implementing the necessary vetting procedures. Trump sees this immigration as a threat and once famously proposed a total ban on Muslims entering the United States. Although this type of policy would likely be impossible to implement, it can be expected that a Trump administration would admit far fewer refugees from the Middle East and result in lower immigration overall. This election has, over a period of two years, shaken our nation to its very core. We have witnessed scandals, controversies, and debates about topics central to our lives. We can only hope the finality of the result will bring some relief, but some tensions will likely remain. After all, Nov. 8 is not just the end of a lengthy election cycle, it is the beginning of a presidency, and all the struggles that will entail. As we brace ourselves for these next four years, we must contemplate the opportunities our democratic system provides, and how we can best use them to our advantage. Hopefully, rather than being despised, our politics can turn into something we cherish.

Here’s one for the books. After achieving the highest scores at our inaugural Middle School History Fair in February, 14 Bulldogs showcased their winning projects at the Chicago Metro History Fair and two are headed to the state competition!
read more
News image