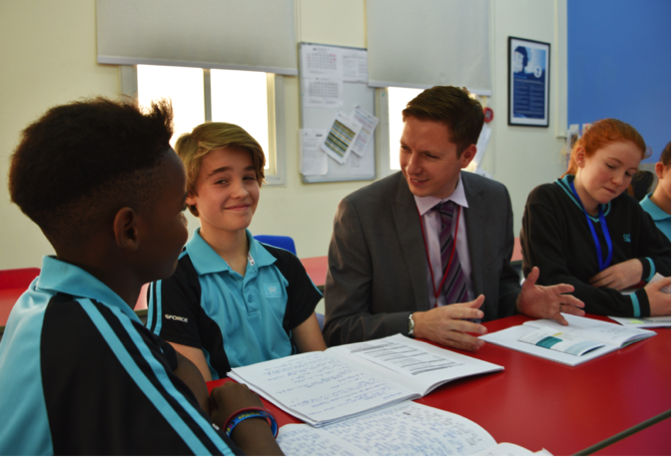 What struck me when learning about NAIS Pudong, was the emphasis on the development of the whole child and the opportunities and experiences on offer to develop them as young people with confidence, resilience and to enhance their wellbeing.  Nord Anglia and the school has a ‘Be ambitious’ philosophy.  For me, that phrase doesn't simply mean academic ambition, as success in life is not simply about academic success, nor does it necessarily just rely on it.  I believe it’s ambition to be the best person we can be and grow traits that would dovetail with academic success to create an outstanding individual. Having previously led in a school on developing ‘character’ in education, the traits gained from opportunities that underpin the development of character in young people strongly link to my educational ethos.  Character is difficult to define.  In the context of this blog, the term character itself I would define as attributes that make up and distinguish an individual that enhances them as a person.  Research supports the importance of developing character in schools.  The Robert Wood Johnson Foundation states that as well as developing students "with strong social-emotional skills” that “students do better in school" and those students are "more likely to graduate and get a well-paying job” (RWJF, 2017).  They identified that as well as leading to career success, by establishing a character culture that develops emotional skills, their long-term wellbeing would also be enhanced.

Throughout my career, I have always participated in and driven the opportunities to develop skills that are not simply academic.  I was lucky enough to begin my career in a school that echoed my desire to provide opportunities for students outside the classroom.  Amongst the leadership positions I held, I also was a Head of House.  This showed to me the power of collaboration amongst students in different year groups for a desired goal as well as a healthy competitive spirit.  It also emphasised that opportunity shouldn't be kept to sport.  We developed house competitions in maths, science, music drama and English.  There were opportunities that led students  to perform on the stage at the National Theatre and to play in national rugby finals at Twickenham Stadium.  It set a great example to me of the plethora of opportunities every child should have to develop themselves. My next school setting couldn’t have been more of a contrast to the first.  Moving from an all-boys, school in the countryside and an affluent area to an inner-city school in one of the most deprived areas of England.  I was heartened to see that both the academic and extra-curricular opportunities did not lack the same ambition.  Part of my leadership role in this school was leading on ‘character education’, which included developing and embedding a ‘growth mindset’ culture in the school. This had a huge impact on the student’s outcomes.  This was rewarded through winning the national ‘Character Award’ by the Secretary of State for Education.  Nicky Morgan, the Education Secretary specifically highlighted our school’s work in her speech stating, “Haywood Academy in Stoke-on-Trent offers a range of character-building activities”. In her speech, Nicky Morgan stated that “Carole Dweck’s work at Stanford, Angela Duckworth’s work on Character Lab, as well as the evidence collected by the Early Intervention Foundation, all point to success being closely linked with character”. The full text of her speech can be read here: Doha, Qatar was where I then moved to a Nord Anglia Education School, Compass International School. As well as making rapid improvements on the academic outcomes of the school, I also saw an opportunity to widen the provision of extra-curricular activities and competitive sport.  The biggest impact was the progression undertaken by the development of the opportunity to participate in the International Duke of Edinburgh Award (DofE).  This evolved from six students from when it first started in 2016, to over one hundred students participating when I left.  Over 50% of those eligible to take part, did.  It is reassuring to see that NAIS Pudong also participates in the Duke of Edinburgh International Award.  The benefits are proven.  A United Learning Trust survey of major UK employers found that in their view, doing the DofE was the most important activity undertaken at school after formal qualifications. In research carried out by World Challenge ('Giving you the edge') the DofE was voted as one of the top three non-academic activities students and universities believe will add the most value to a personal statement. Recognising the additional skillsets and experiences the DofE award brought, we developed it further than the age groups allowed by the award by allowing Years 7 - 9 to carry out a pre-DofE award.  The character skills were able to be developed through an ‘expeditions week’.  When I left, we had started to develop a framework for the primary students to also take part in a specialised programme.  The engagement and student achievements were recognised formally by the International Award by making Compass the flagship school for the award in the Middle East.  This was supported most recently by the school being the recipients of a Royal Mint commemorative coin for services to the award.  Only one hundred were given in the world. Leadership opportunities for students are also key in developing character.  Having developed the traditional Student Council structure at most schools I have been in, has allowed an enhanced student voice and leaders in different areas of the school from House Captains to Sports Captains, Form Councilors and Cabinet Members.  I have always challenged the traditional methods of a Head Boy and Girl system so that those students in lower years also have a vehicle to lead, not just the students in the oldest year groups of primary and secondary.  I note how the student leadership team has been empowered at NAIS Pudong in developing initiatives to develop wellbeing and mindfulness in the school.

Being a primary and secondary school provides the opportunity for all of the students to collaborate and learn from each other. One of my favourite memories is from listening to the poems of the primary school children at a whole school event.  Observing Year 1 students sharing the same stage as Year 13s to read their poems was amazing, especially the confidence that the primary school children had compared to the secondary.  Utilising opportunities to build character ensures that the confidence our primary students have is kept as the children grow older that can sometimes be lost.  Ultimately it is about creating an environment and mindset that students are comfortable with and confident in achieving which is key to success. I have recently enjoyed reading about the journey primary students have been going through during world book week. I am enthused about the opportunities that the students already have, both in the classroom through the development of learning pedagogy by Paul Antcliffe the Head of Primary, to the supportive environment created for the students to succeed and feel safe.  I have read with interest the importance of outdoor play by Kelly Ann Downs as she emphasises the impact outdoor play has on cognitive, social and emotional development as well as physical benefits.  No more is this apparent than the forest school provision that the primary school enjoys. Having been awarded a homemade 'stick man' by one of my sons recently, I am very aware of the benefits of this provision.

I have enjoyed meeting some staff, parents and students at NAIS Pudong, and I look forward to opportunities to meet all of the community in the near future. 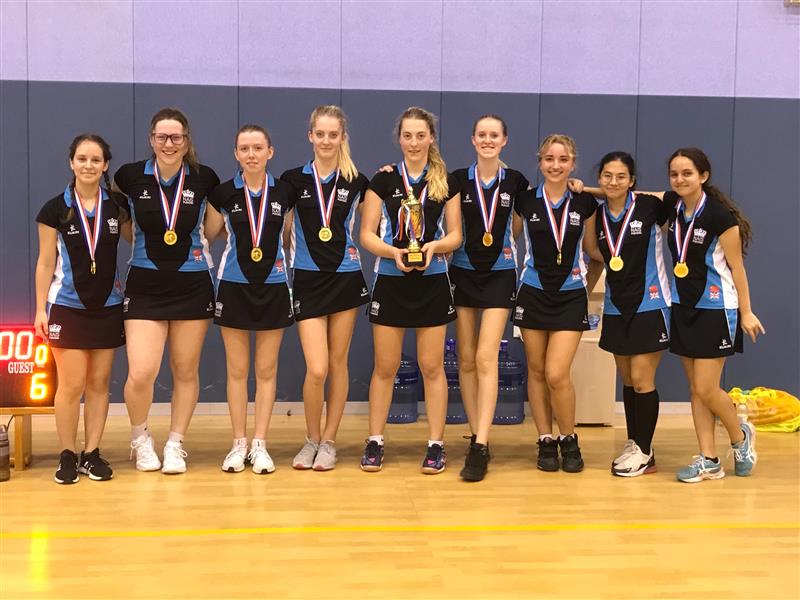 SISAC Sportsperson Award for 2022 to Caroline

Today we celebrate our Year 13 athletes at who have represented the Pudong Tigers teams and contributed to the success we have had in many sports for many years. Our students competed on the court in netball, basketball, and volleyball, on the sports field with football and in the pool breaking so many personal bests over the years. Our hope is as these students move to university, they continue to keep sport in their life and try new things, join teams and clubs and have an active lifestyle. Take a moment to think of someone that you consider to be wise. Now hold that thought. 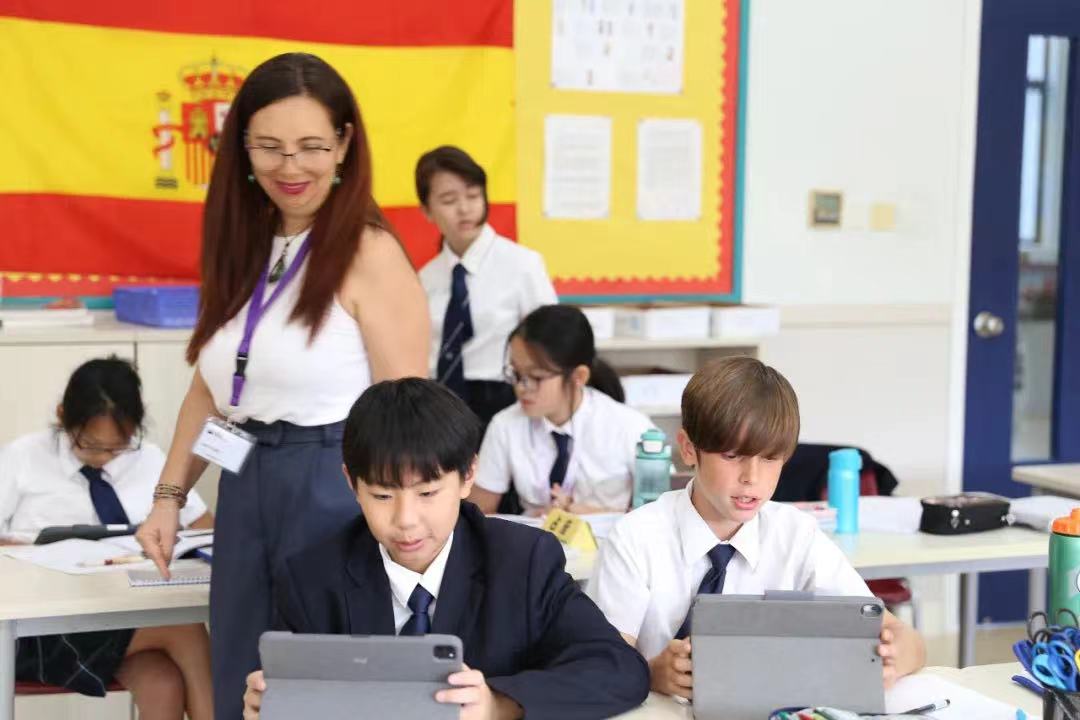 What an amazing outcome for our students in Y5 to Y9 in the Education Perfect FOBISIA LANGUAGE Championship!